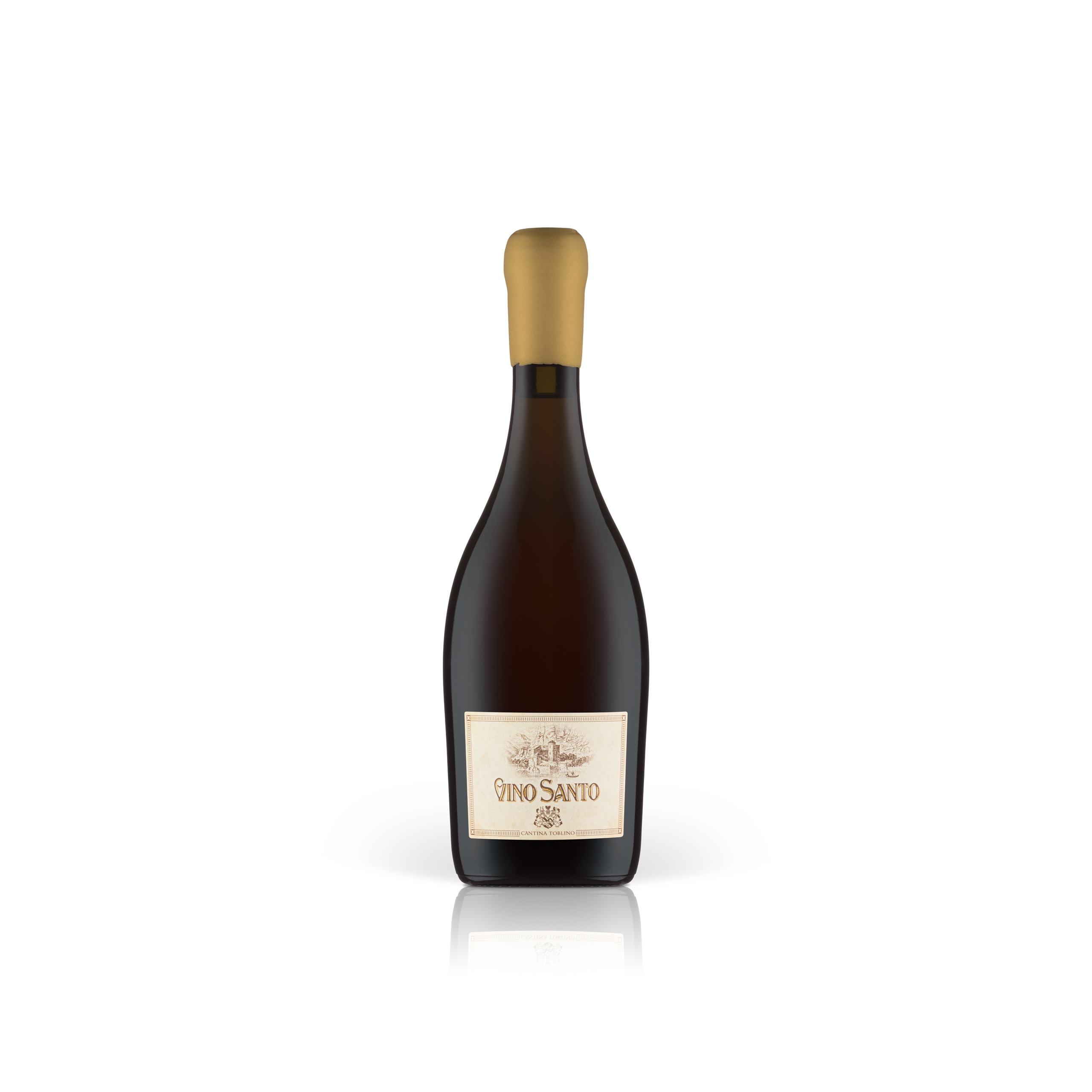 Grape variety: Nosiola is the only native white grape variety of Trentino, used to produce dry white wines and the sought after "Passito dei Passiti", or the Vino Santo Trentino DOC.

Vineyards: from the most suitable vineyards in the Valle dei Laghi, where a very favorable microclimate meets the best exposed, dry and gravel-rich soils. Only a tenth of the vineyards in Nosiola are suitable for the production of the grapes used to produce the Vino Santo Trentino DOC.

Natural drying: after the harvest, the ripest bunches of Nosiola are gently placed on traditional racks called arèle, which allow a slow drying that traditionally lasts until Holy Week, thanks to the constant wind that comes from the Brenta Dolomites and the "Ora del Garda", a breeze that blows lightly from Lake Garda through the Valle dei Laghi. The final touch is given by the presence of noble rot that develops inside the bunches, strengthening the drying process with a consequent increase in the sugar concentration that gives the grapes an unmistakable flavor.​​​​​​​

Vinification & Aging: the pressing traditionally takes place during Holy Week, after one of the longest drying in the world which lasts for almost 6 months, thus obtaining the precious must of the Vino Santo with almost infinitesimal yields. Subsequently, fermentation starts in small French oak barrels which lasts for over 2 years, gradually reducing the sugar concentration. The Vino Santo continues its long aging in the same small French oak barrels where it rests for over 10 years, ending its long maturation with over a year in the bottle.

Organoleptic Characteristics: a bright amber color. On the nose, Vino Santo offers an extraordinarily complex and elegant fragrant bouquet, with hints of peach and overripe apricot, jams and honey. On the palate, it is pleasantly sweet and round, with great persistence and an important acidity that balances perfectly with the residual sugar to create a harmonious and never cloying combination.

​​​​​​​Tasting & Pairing: to be served preferably at a temperature of 8-10 ° C in small tulip glasses. Vino Santo is a meditation wine, to be enjoyed slowly to fully grasp every nuance. By contrast, it is able to enhance the noble taste of some moldy cheeses such as Gorgonzola, Stilton, Bleu d’Auvergne, Roquefort or Cavras, in which the molds of dairy products delicately harmonize with the wine created by noble rot . Try it with Foie Gras. It goes perfectly with traditional Trentino dry pastries, for example with fregolotti cake, strudel and biscuits. Vino Santo can age in the bottle for many decades, becoming one of the most durable wines, capable of offering great satisfaction and pleasantness even 50 years after the harvest.

The item has been added to your cart 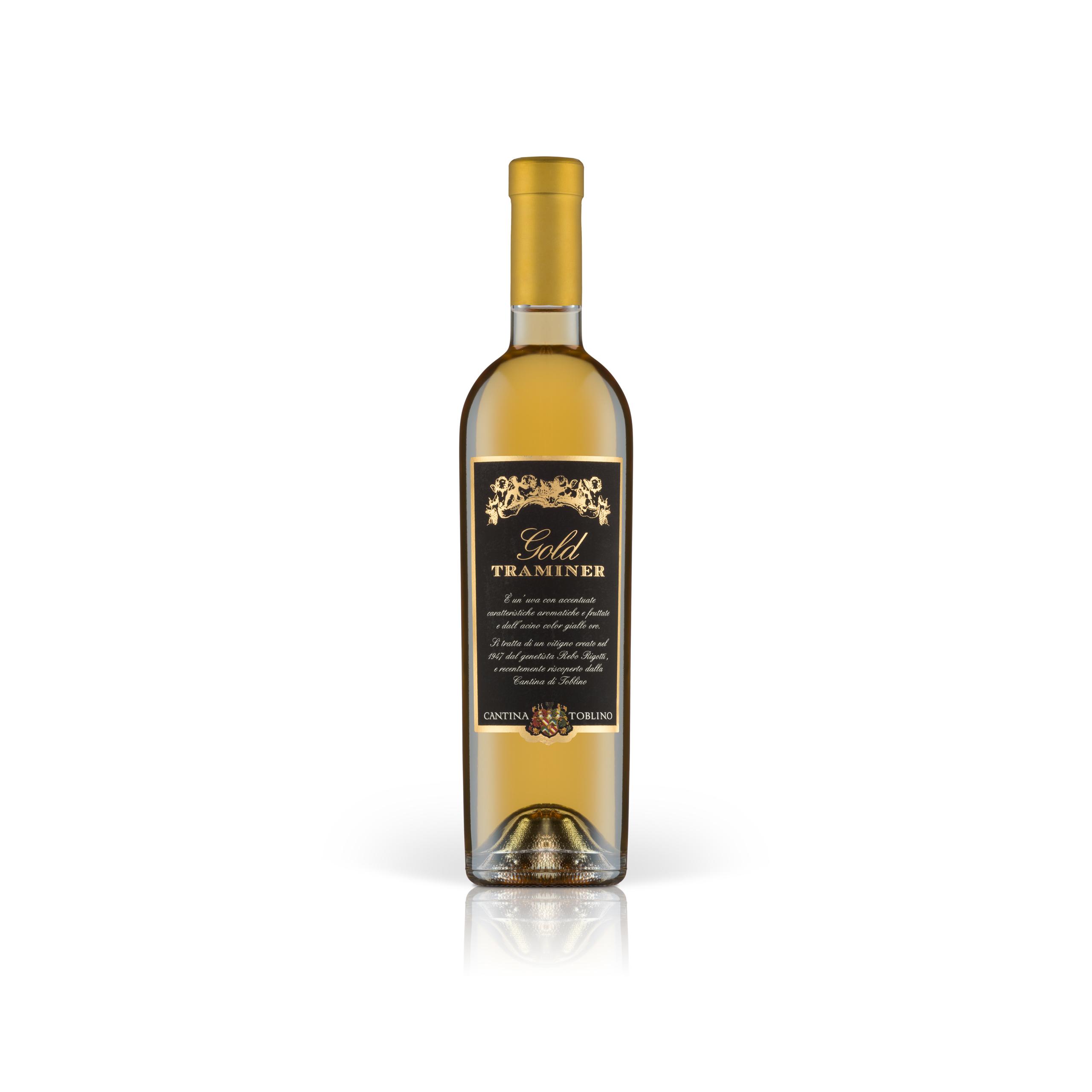 VIGNETI DELLE DOLOMITI IGT Grape variety: Goldtraminer (crossing Rigotti 84-11), is a variety obtained in 1947 by the renowned researcher Rebo Rigotti through the crossing of Gewürztraminer and Trebbiano Toscano.Recently brought to light by Cantina Toblino thanks to a collaborative experimentation with the Edmund Mach Foundation (Institute of San Michele all'Adige). Vineyards: from the vineyards of the Az Agr Toblino - Bio Ceritizzato located in the Sarca river and cultivated with guyot. ​​​​​​​Vinification & Aging: after crushing-destemming, the grapes are pressed and vinified in reduction, or in the absence of oxygen to preserve their aromatic characteristics. A prolonged refinement in steel and a few months in the bottle follows..​​​​​​​ Organoleptic characteristics: golden yellow color.On the nose, it is aromatic, intense and fragrant with flavors of over-ripe fruit and flowers. On the palate, the Goldtraminer is pleasantly sweet, round, fresh and with a long aromatic persistence. Tasting & Pairing: to be served in tulip glasses at a temperature of 8-10 ° C.A sweet wine suitable to accompany any type of dessert from the most traditional to the most creative.By contrast, it goes perfectly with mild cheeses and tasty mature cheeses served with mustards and honey. 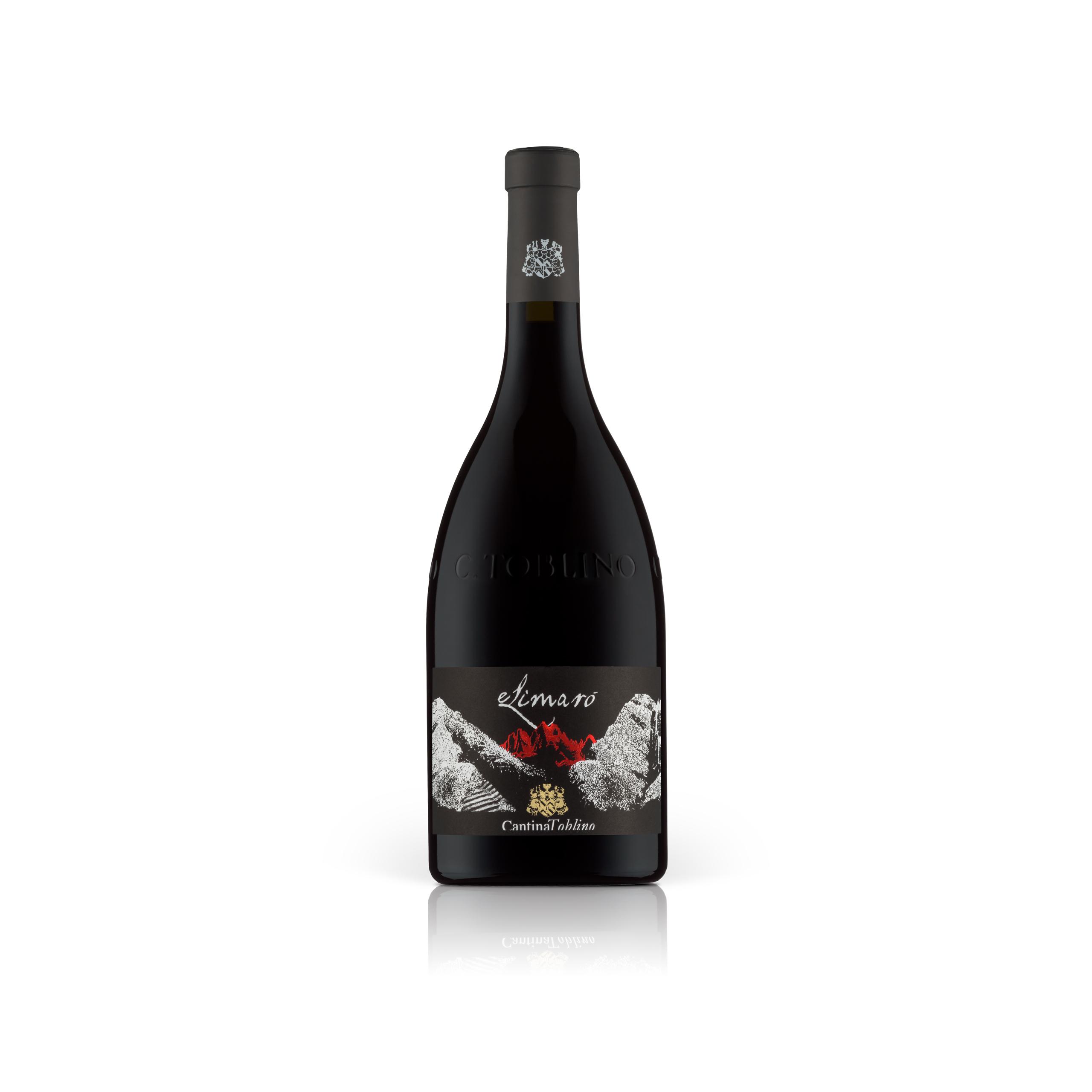 VIGNETI DELLE DOLOMITI IGT Grape variety: Rebo and other crossings Rigotti, to be considered autochthonous grapes of Trentino. Vineyards: selection of the best grapes produced in the vineyards adjacent to Cantina Toblino in the Sarca Plan, conducted under organic farming in collaboration with the Edmund Mach Foundation (Agricultural Institute of San Michele all’Adige). The microclimate favorable to the cultivation of vines blends with loose soils of alluvial origin, formed thanks to the carryovers of the Sarca river coming from the Brenta Dolomites and passed through the characteristic Limarò gorge over time. Vinification & Aging: the grapes reach perfect maturation thanks to a particularly dry and windy microclimate created by the interaction between L'Ora del Garda, which blows in the afternoon from the south-west, and the cold currents that descend through the Limarò gorge from the north, which guarantee a marked thermal excursion. After crushing-destemming, the grapes are vinified in truncated cone vats with a long maceration in contact with the skins. The aging, which lasts at least 36 months, takes place only in large oak barrels. After a brief evolution in the bottle of a few months, eLimarò is ready to be marketed. Organoleptic Characteristics: deep ruby ​​red color. On the nose, eLimarò expresses an intense and complex aroma, with notes of ripe red fruit in alcohol and spicy nuances. On the palate, it shows an important, broad, warm and round structure, with a finish characterized by good freshness that makes it pleasant and balanced.​​​​​​​ Tasting & Pairing: to maximize the elegance and structure of this wine, to be tasted in large glasses at a temperature of 16-18 ° C in combination with red meats and aged cheeses. Excellent with elaborate meat-based recipes such as braised meats, stews and stews of meat and game. 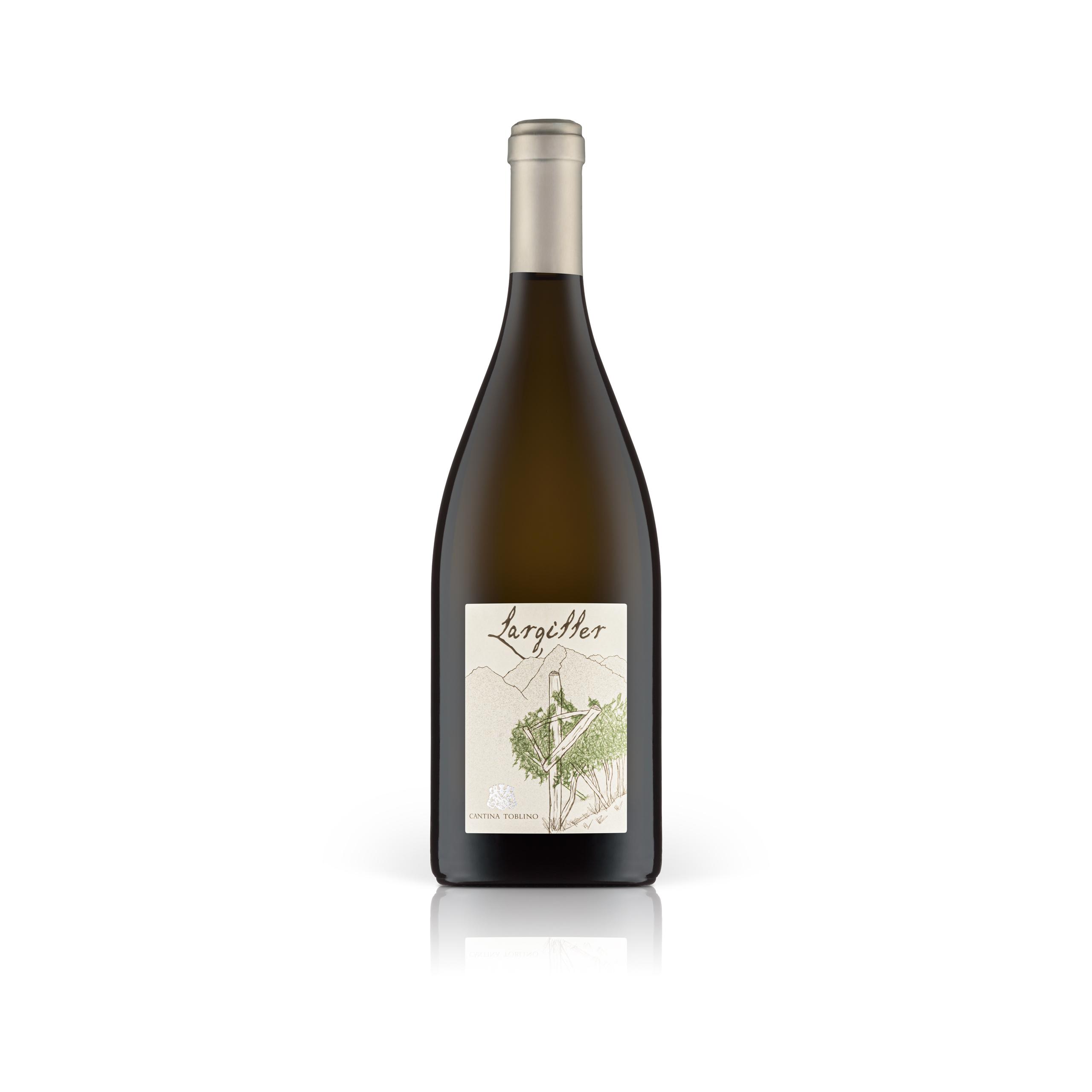 VIGNETI DELLE DOLOMITI IGT Grape variety: Nosiola is the only native white grape variety of Trentino, used for the production of fine white wines. Vineyards: selection of the best grapes produced in the vineyard of the locality “Argiller”, one of the best crus for the production of Nosiola in the entire Valle dei Laghi. Vinification & Aging: the selection of the best Nosiola grapes allows for a soft pressing to slowly extract a high quality must followed by a light maceration on the skins. Immediately afterwards, fermentation begins in large oak barrels where the wine ages for over 6 years before bottling. Following a refinement in the bottle that lasts for a few months and almost 7 years after the harvest, the wine is finally ready to be marketed. For this reason, Largiller is produced only in the best vintages, when the quality of the grapes expresses its maximum potential. Organoleptic Characteristics: a deep straw yellow color with brilliant golden reflections. On the nose, the Largiller is very intense and complex: the slight fruity nuances reminiscent of grapefruit and green apple are accompanied by soft floral touches that recall the broom and the wild lime, leaving a delicate hint of hazelnut on the finish. On the palate, it has a balanced, broad, round structure with excellent persistence, ending very fine and elegant with hints of wood and minerals.​​​​​​​ ​​​​​​​Tasting & Pairing: to appreciate the unique characteristics of this elegant and complex wine, taste it in large glasses at 10-12 °C in combination with all kinds of fish dishes, white meats or mushrooms, like the ones you may find when visiting Trentino and Valle dei Laghi. 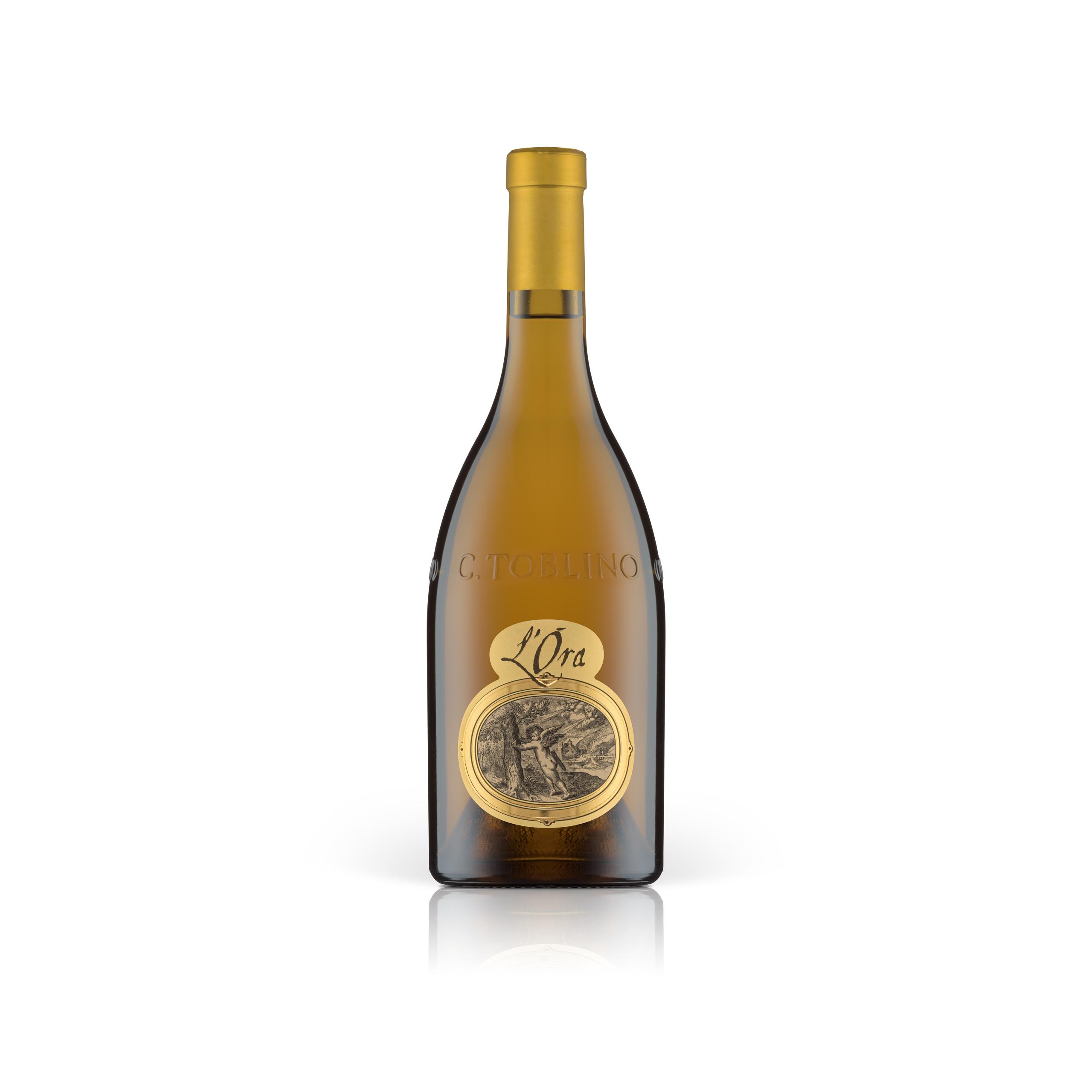 VIGNETI DELLE DOLOMITI IGT  Grape variety: Nosiola, an autochthonous grape variety from Trentino. Vineyards: produced exclusively in the most well-exposed vineyards in the surrounding of Cantina Toblino, a perfect land for over-ripening these precious grapes on the vines. Vinification & Aging: a mild climate and the incessant light breath of the Ora del Garda, create the perfect conditions for the ripening of these Nosiola grapes. After the harvest and a short period of drying in an airy environment, a soft pressing takes place to extract a must with unique characteristics, suitable for prolonged maceration on the skins. Refine in acacia tonneaux for over 12 months. It concludes the refinement in steel for over 24 months and then in the bottle. Organoleptic Characteristics: a deep straw yellow color with golden hues. On the nose, an intense, complex aroma with light fruity notes that blend with pleasantly spicy and balsamic sensations. On the palate, "L'Ora" has an intense structure, very broad and round, with excellent persistence. ​​​​​​​Tasting & Pairing: to best appreciate the complexity and elegance of “L’Ora”, it should be served in wide wine glasses at a temperature of 10-12°C, to accompany first courses, white meat or fish dishes. It can be an excellent pairing with mushrooms and truffle.